Over the past few days there have been thousands of complaints from BitTrex users who have been locked out of their funded accounts for seemingly no reason. One common theme in every complaint received is that users have attempted to open tickets and have even sought help on the exchange’s Slack, only to be ignored and banned, respectively.

One user complained that he has six Bitcoin in his BitTrex account ($30,000+) and no longer has access to his funds and receives no answers to his support tickets. Below are just a few of the thousand complaints BitTrex received yesterday. 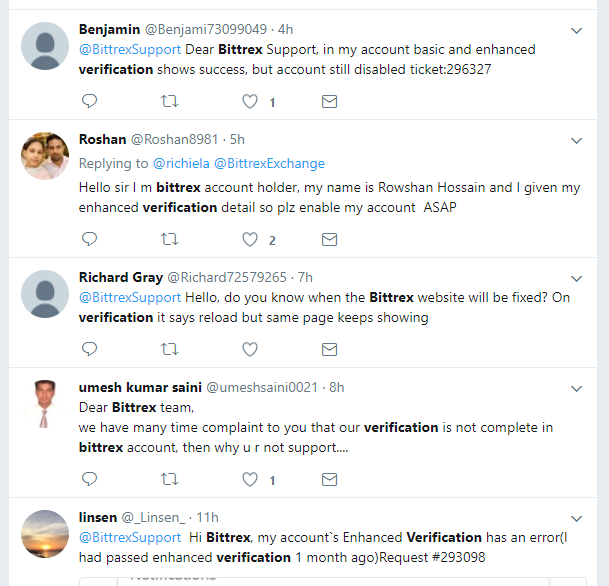 At the time, it was unclear why this was happening, but it appeared that most people who were having problems were people with verified accounts. The error most people were seeing when they tried to login was this:

It’s extremely unusual for an exchange to suddenly disable thousands of accounts without any announcement or any replies to support tickets. It’s even more bizarre that Bittrex is apparently banning people for asking for help in their support Slack.

A day after all of these complaints were received, BitTrex put out a statement about it on their blog.

We occasionally conduct compliance reviews and are working vigilantly to protect our service and our users from harm. As part of a compliance review, we have temporarily suspended certain accounts pending the completion of the review. The total number of suspended, closed, or banned accounts is very limited: less than 0.1% of the total accounts on Bittrex.  More than 99.9% of Bittrex accounts are unaffected.

That doesn’t help the people who can’t get responses from the BitTrex team. This is a common problem in cryptocurrencies, exchanges often have very limited support systems in place. Coinbase took a step in the right direction by offering direct phone support for users who needed help on their exchange.

The statement goes on and they address the slack allegations:

Any reports that Bittrex miscalculated or misapplied its exchange fees, that there is a security problem with the exchange, that Bittrex lost any coins stored on users’ behalf, or that Bittrex is banning people trying to access Slack to discuss the status of their accounts are incorrect.  We are committed to making Bittrex a strong, safe, and compliant exchange where people can securely participate in the digital currency economy.  We ask for patience from our highly valued customers. As for us, we plan to “keep calm, and carry on.”

This still doesn’t help the thousands of people who’s accounts have been disabled and the users that have been banned on their slack channel. Their support tickets still have not been answered and the problem persists.

Also @Bittrex, “As for us, we plan to “keep calm, and carry on.”” - What is that supposed to mean? Don’t ignore your users, provide SUPPORT. If it is only 0.1% of the total users, you should have no problem quickly resolving this. Step up your support game since many people like the exchange, support just sucks.

and my account still disabled till now with out any response, this company should follow the low, is their away we can report them or file a case against them
we need or many back

My account with more than 13000$ is disabled and they just say “it’s under review” about 8 days is past and this site is not response. and fork 25 october is near..why bittrex in this days locked these account…it’s clear..they will not support bitcoingold yet and if they dont support it on 25 october they can use our coin to give BTG in other wallet and exchanges….yes more than 1000 account is disabled yet and if each person just have one bitcoin ( i have more than 4 bitcoin) then it will be 1000 BTC and they give 1000 BTG with our money for free and BTG is about 1400$ now…so they give 1,400,000$ !!! yes with our money they give this money for free and not any response …… bittrex is rubber … take out your money before they disable you……

no they are not responeeeeeee….. more than 2 month is past… they gave BTG to disabled account but can’t withdraw or trading….. with no clear reason more than 1000 acoount is disabled it’s about 2000 bitcoin with this users and is about 22 million dollar is blocked more than 2 months !!!!

My account has been disabled since 12 days ago and no response to my ticket yet. They don’t answer or questions in their slack.

To owners of accounts disabled
Join this group
https://www.facebook.com/groups/366201860503420
Let’s do something for our calculations

You called them?
Can you tell me their phone number? I would like to called them as well.

My account with 10000 dollar is disabled for 3weeks! I dont know what can i do 🙁
They Just reply to my tickets “we r reviewing ur account”!

Have you guys been able to enable your accounts yet ? Just curious how long it took for you ?
Mine got disabled week ago.

6 weeks locked out - only auto responders, no human interaction with their clients. Bad Bad Bad

My account is also disabled since 4 week despite submission of all required documents…. what happened to them?

Dear my bittrex account is disable since 5 months and there is no action for my tickets
plz hepl me.

No reply from twitter team also and really frustrating I been following with the bittrex support team from last 30 days to activate my id send all detail 10 times but no solution. My ticket number #470303

Mine account is disabled and i submitted the documents, they verified my account and said your querry is solved but my account is still disabled. I have safex coins stuck in my wallet. Please tell somebody what to do?

account disabled since November… no human replies or updates…..

I have a ticket open for two months I got twice a reply but no solution yet. The Enhanced my account what is great but when it is still locked I can’t do anything. Up till today no support and no phone number to call. And my cions at 6500 USD are lost in space…….
Bittrex WAKE UP!!!

How many days, months, years I have to wait for my account to return!? is someone whose account has been enabled

Same complaint here. My account was disabled 22 days ago when i was verified for upgraded account. No response at all from support.

My account is disabled 2 months ago. They are not responding via email. Do someone has their phone number please?

5 month later s and 60 support requests with automated responses and still unable to withdraw my money. Losing money every day. I have enhanced verification, but I am not getting emails, although I receive support automated emails. Requested email change, sent all documentation. Still no email to withdraw my cash. As far as I am concerned Bittrex must be investigated as a financial scam. I have filed complaint with Nevada and Florida State Attorneys.

I have now filed a complaint with SEC> Thank you.

I have also filed complaint on SEC. I’m experiencing same problem, have been locked out of my account for about 3 weeks.