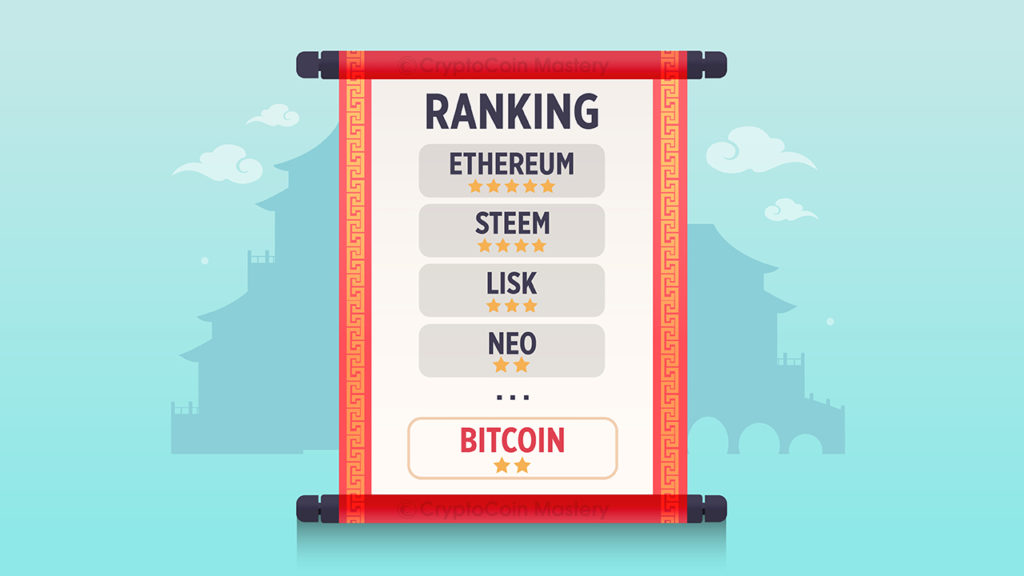 Even with the government banning cryptos, China has remained relatively connected to the field and the China Center for Information Industry Development (CCID) has released a list of the top cryptos based on their research. Criteria for the rankings included innovation, technology and application. The government described the rankings as an “independent analysis of cryptocurrencies and global public blockchain technology demonstrates the confidence of the Chinese Government in the technology, and will act as a guide for government, enterprise and research institute.”

Ethereum topped the CCID’s list as the top crypto. It was followed by Steem, Lisk and NEO. The big surprise of the list was bitcoin, who placed 13th overall. This stems from a number of problems such as scalability issues and security threats. Bitcoin Cash was even lower, barely cracking the top 28. This is not the first time that bitcoin has done poorly in a review. Weiss Ratings scored bitcoin as a C+ which was seen as highly controversial as bitcoin was near its $20,000 price peak. Weiss defending their decision citing the network delays and high transaction fees. Ethereum on the other hand was one of Weiss’s top cryptos similar to the Chinese ratings.

Many still question the legitimacy of these rankings. There is little information available as to how exactly the rankings were created and what criteria carried the most weight. Many have suggested that the committee favored strength of blockchain over the currency itself. This is apparent as only 1 of the top 4 cryptos by market cap broke into the top 10.

Some question how much the influence Chinese policies had on the rankings. Their government model focuses on control and an independent, decentralized crypto exchange could pose a threat to their hold. This study may be a potential insight to the government and central bank’s view towards cryptos as well.

If they are putting the effort into studying them then there lies a possibility for them to even issue their own crypto. For now though, there is no other news into what the government plans to do regarding cryptos.

How to Handle Volatility of Cryptocurrency

Walmart Plans to Develop Its Own Cryptocurrency

Litecoin Halving Event: What You Need to Know

US Tax Authorities Cracking Down on Crypto Earnings